Betcha Didn’t Know This: Kick off in No-man's Land

Perhaps the last place you would think of seeing a game of football (or “soccer”, if you are American) is that of the smoking wasteland of a battlefield. However, that was exactly where a number of football games were seen during World War One (WWI).

WWI saw an unprecedented level of destruction and loss of life as the Allied Powers of Britain, France, Russia and, eventually, America, fought against the Central Powers of Germany, Austria-Hungary, Bulgaria and the Ottoman Empire. Soldiers had to endure gruelling trench warfare and face the enemy across No Man’s Land. Over 16 million lives were lost, including soldiers and civilians.

Given such devastation, it’s hard to imagine anything as light-hearted as a casual football game to have taken place during the war. Yet, on Christmas Day of 1914, the first year of the war, some German, British and French troops came out of their trenches into No-Man’s Land and exchanged greetings, gifts and even played football with one another. 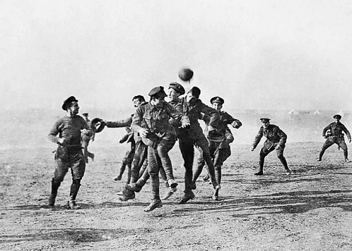 Unfortunately, the Christmas truce, as it was called, was not to last. In fact, some commanders became anxious to prevent their soldiers from interacting with the enemy on such friendly terms. The British forces even made footballs a form of contraband in the trenches. Still, these rules failed to diminish the passion for football on the battlefield.

In 1915, while his comrades fumbled with their gas masks to survive the use of chlorine gas, rifleman Frank Edwards was busy pumping every breath of his into a rubber ball that he had successfully smuggled.

Upon hearing the whistle to leave his trench and charge towards the enemy lines, Edwards advanced with his fellow comrades while passing his ball around. Almost immediately, he got shot in the thigh and suffered from the chlorine gas but managed to survive his injuries and the war. His ball got caught in the German barbed wire and is now on display  at the London Irish Rifles Regimental Museum. 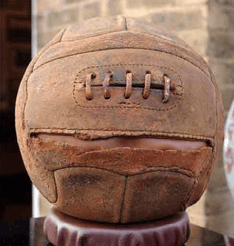 Edwards was not the only soldier to have defiantly dribbled a football in the face of gunfire,  heavy shelling and the enemy.

In 1916, during the Battle of the Somme, one of the worst battles in WWI, a squad of soldiers from the 8th East Surrey Regiment advanced from the British trenches towards the enemy while dribbling footballs. The balls were provided by their commander, Captain Wilfred “Billie” Nevill, to encourage the soldiers under him and boost their morale.

Captain Nevill had written “The Great European Cup-Tie Final. East Surreys v. Bavarian. Kick off at Zero” on one of them and “No Referee” on another. The latter was supposedly referring to his instruction to his men to not to go easy on the enemy. The Captain dribbled one while his men passed the other around themselves.

During that particular offensive, Captain Nevill was killed by a bullet wound to his head. He had offered a prize to the first of his men who could land either of the balls into the German trench. The prize was left unclaimed. 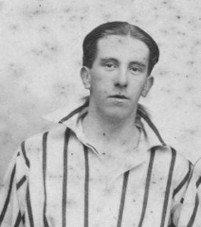 Surprisingly, both balls were eventually retrieved from the battlefield and put on display  at separate museums, although one was sadly destroyed by a fire in 2015. Captain Nevill lies buried in the Carnoy Military Cemetery in France.

It seems almost unbelievable that football would have such a place in the stories of WWI. Strangely enough, the game brought about echoes of chivalry, bravery and camaraderie amidst the carnage and brutality of the war.

The article is based on the research of our YouthCreators.